Simon Manchester was a Wellington businessman whose passion for collecting ceramics began over thirty years ago. Among his many varied business enterprises, in the 1980s he set up EX23, designing and making high end leather goods. In the 1990’s he ran Trash Palace, an outlet store for mid-century design and studio pots. Eventually, he became the owner/manager of his central city apartment building. For some time he was the ceramics consultant for Dunbar Sloane, auctioneers.

His mother Judith was born in Whanganui, the granddaughter of J T Ward who set up the Ward Observatory in Whanganui.  Sadly, Simon died at the age of 61 in July of 2019.  Before he died, he expressed the wish that his collection of approximately 3000 works should be gifted to the Rick Rudd Foundation so it could be enjoyed by the public.

Simon collected works from many potters but rarely purchased just one piece from a maker. He often had numerous works – collections in their own right.  The whole collection is now available as a national resource and one room in the Museum, titled Simon’s Treasures has been set up to evoke some of the feeling of being in his apartment.

Simon was always generous in lending works for exhibitions to museums and galleries around the country, including Quartz, Museum of Studio Ceramics.  He wanted to share his passion and his collection and now this will continue with exhibitions at Quartz and, hopefully, with lending to other institutions. 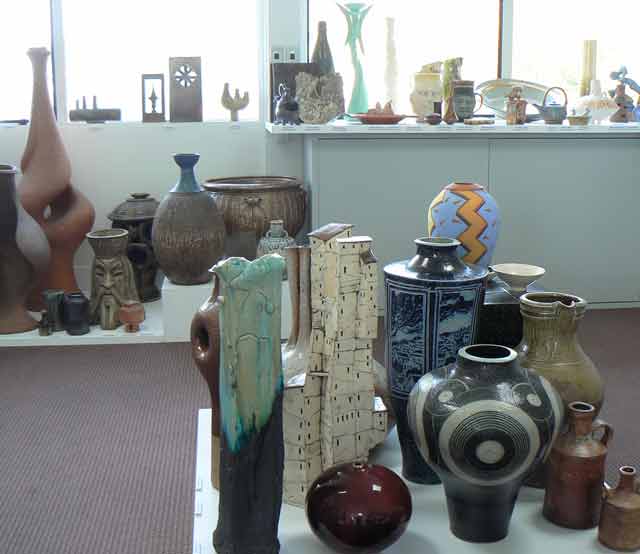 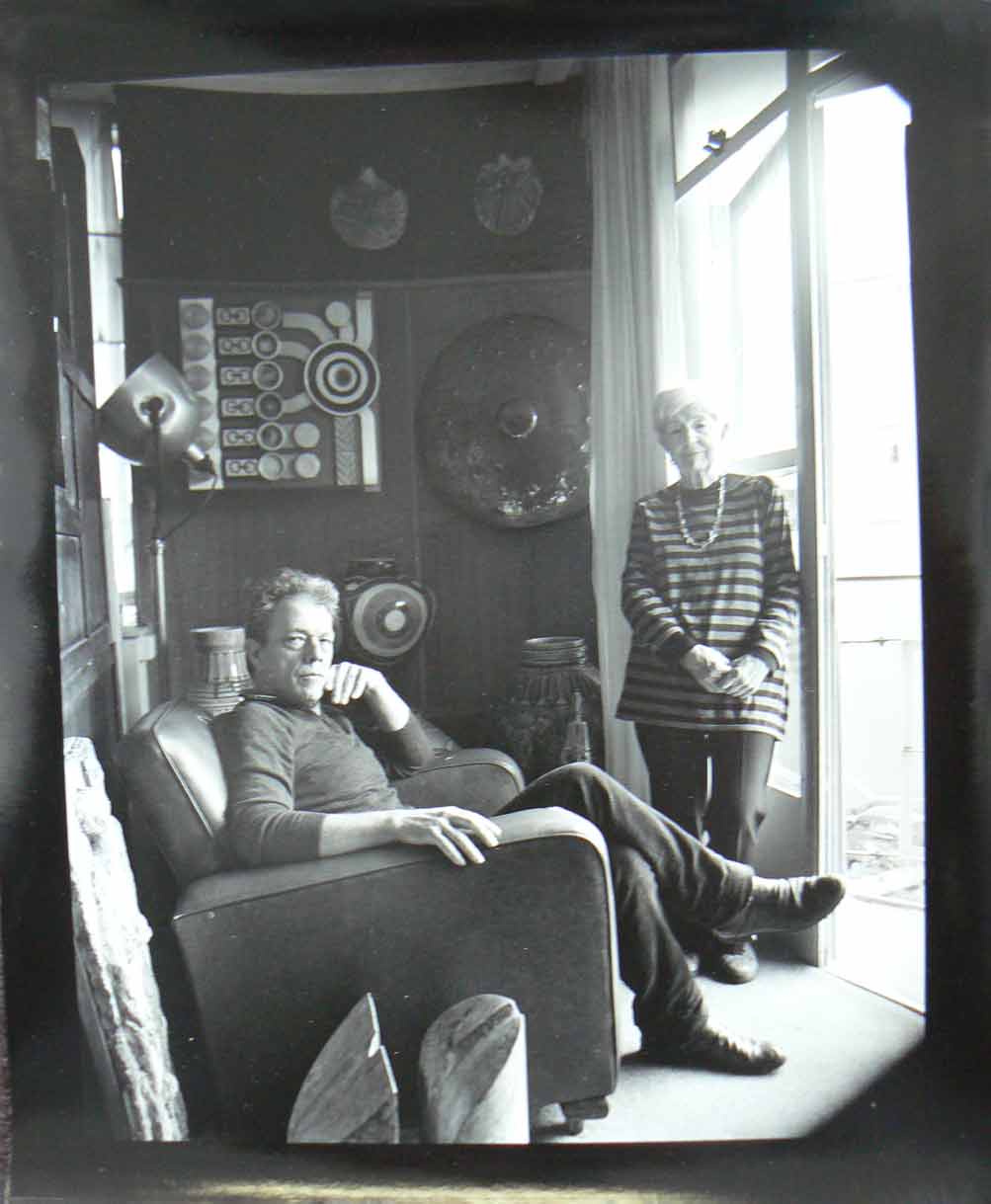 Simon had a large archive of photographs, ephemera, catalogues, and publications. This image is one of 23 images of a photo essay completed in 2012 by Andrew Ross. The entire essay of works is held in Simon’s archive. This image shows Simon and his mother Judith in his Central Wellington apartment.

Simon was a friend to many potters and over the years became very close to Len Castle whose work he greatly admired. Simon collected over one hundred of Len’s examples. The photograph below was taken in 1997. 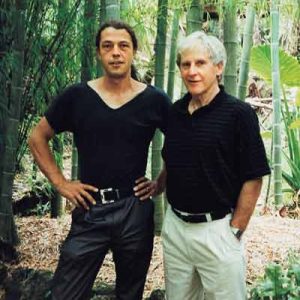 Simon lived on the top floor of his own apartment building in Central Wellington. Although the apartment was full of ceramics and his other collections, there also was a caged off area in the ground floor garage of the building which held a myriad of boxes overflowing with more works.

Many people remember his striking image striding around the Cuba Street area. He was good looking, tall, wore a long black coat in winter, or a black leather jacket, his hair in a pony-tail – he was instantly recognizable. 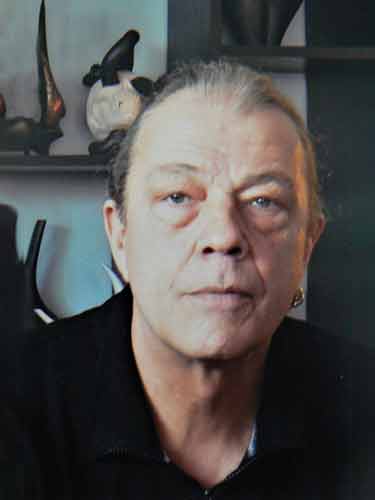 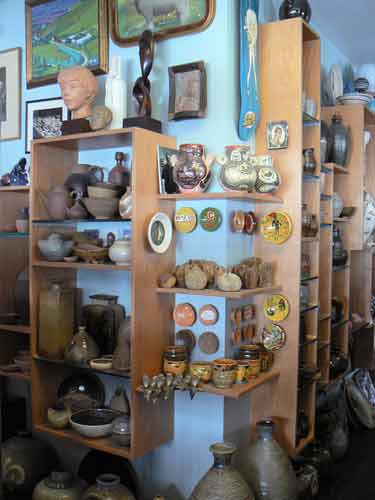 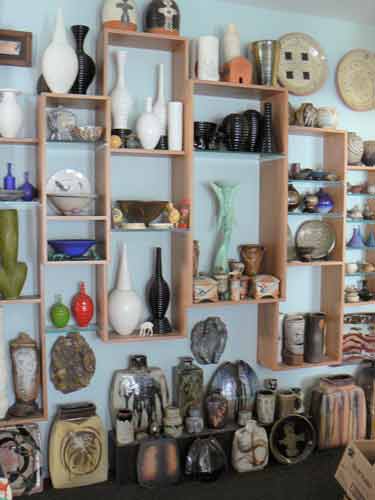 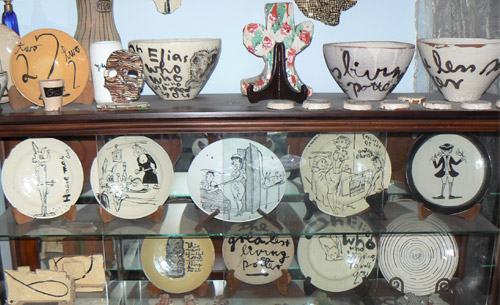 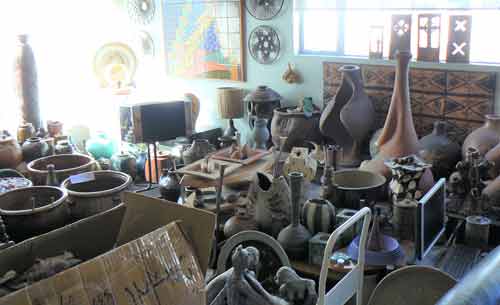 Above are images of Simon’s apartment.

Simon only made one work in ceramics.

At ten or eleven years old, what boy would not make a ‘dinosaur’!

Martin Poppelwell &
The Boys of the 70s

Martin Poppelwell (born 1969), Richard Stratton (born 1970), Paul Maseyk (born 1974) and Andy Kingston (born 1979) are four of the most exciting potters of today.  Their work is largely vessel-based but really the objects are vessels for the expression of their ideas and utility is totally inconsequential.

This amazing group of works is on permanent exhibition. It challenges the viewer with some imagery but celebrates the achievement of the four makers. 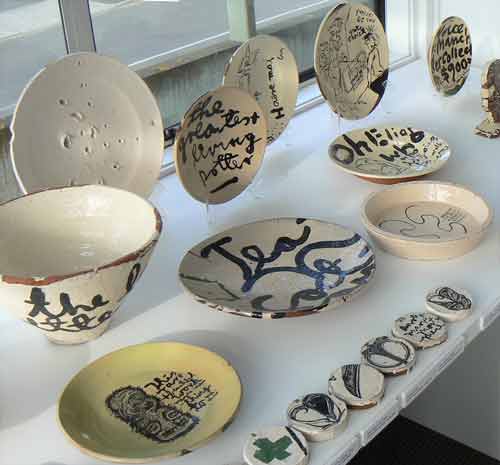