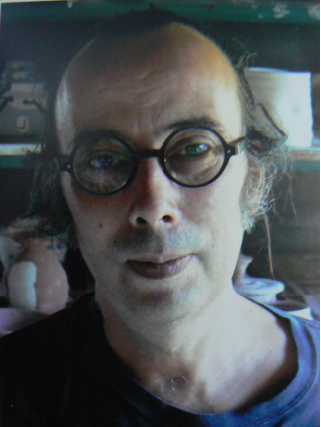 Aaron Scythe was born in Auckland and after leaving school in 1986 became a slip-caster at Halls Industries, making mainly ceramic lampshades.  In 1998 he began a Craft Design course at Carrington Polytechnic and a year later went to Sydney to study at East Sydney Tech Ceramic School.

He moved to Sturt Craft Centre, Mittagong, NSW in 1993 for work and self-directed study.  While there he built and fired an anagama (wood-fired) kiln, also spending short periods in Dubbo, NSW.

In 1995 he first visited Japan for further study and in 1997 rented a studio in Mashiko, building a second anagama kiln.  He established a permanent studio in Mashiko in 2006 and built a third wood-fired kiln, but following the Fukushima meltdown in 2011 Aaron, his Japanese wife, Soari and their two children came to New Zealand to live.  He set up a studio in Te Aroha in 2012, moving to Whanganui in 2014.

Aaron has studied many aspects of the Japanese Mino style of pots including Oribe, Kizeto and Hikidashi techniques and shino glazes.  During the sixteen years he lived in Japan he had over sixty solo exhibitions and since his return to New Zealand Aaron has continued to exhibit in Japan as well as exhibiting in this country, the UK and USA.

Back to temporary exhibitions