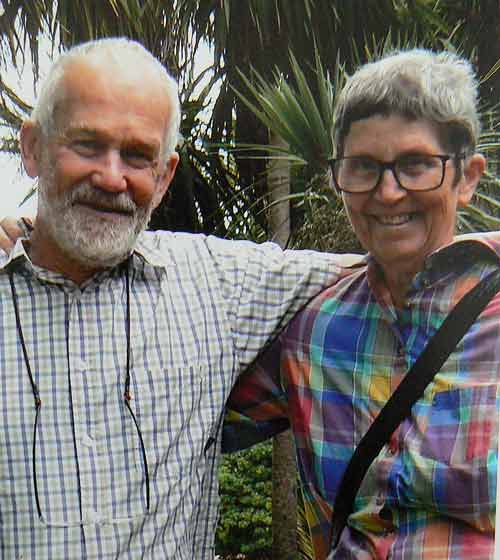 In the Shadow of the Mountain

They met on the shores of Lake Victoria while teaching at a High School in Kenya.  Lynn was trained in genetics and Mike in English literature.

They began working with clay in Montreal, Canada in the late 1960s and came to New Zealand in 1971, setting up as full-time potters in 1973.

They fired their work in diesel kilns until 1983 when they built a two-chambered wood-fired kiln because they enjoyed the effects of flame and ash on their work.  They salt glazed and also used traditionally inspired Japanese glazes.  These firings took from 26 to 30 hours and because of the physical nature the last wood firing was held in 2006.

Since 2006 Lynn and Mike have worked with white stoneware and porcelain clays fired in an electric kiln, which has produced brighter and more intense colours.

Neither Lynn nor Mike have had formal arts training.  They have learned through books and trial and error.  Their thrown, press-molded and hand built kitchen and tablewares have developed into distinctive styles over the years.
Their work has remained functional and is meant to be used rather than made just to be looked at.

Lynn and Mike have lived in the shadow of Mount Taranaki on a four-hectare property at Okato for 47 years.  They have created an extensive garden and developed two acres of bush bounded by the Stony River.  Their home is the property’s original villa built in 1904.

I’m grateful to Lynn and Mike for organizing this collection of their works which are iconic in Taranaki.  It is a sample of their over 50-year involvement with clay.